A former member of the legendary American rap group The Funky 4 +1, MC Sha-Rock is the first female rapper of hip hop culture. Born in North Carolina and raised in The Bronx in the 1970s, she started out as a B-Girl and became the first woman to be part of an all-male rap group. She was also the first female rapper to appear on national television in the US, to be on cassette tapes and to have an all-female hype crew.

The 58-year-old artist told us how she contributed to build hip hop, how she became a member of The Funky 4+1 and how women played a major role in the evolution of the culture.

We chose to transcribe her interview and to publish the audio as well to make this founding voice of hip hop culture heard.

How and when were you introduced to hip hop for the first time?

Back in 1973, there was a man by the name of DJ Kool Herc who gave the first hip hop party at 1520 Sedgwick Ave in the Bronx. He moved that party down to Sedgwick Ave and Cedar Park and started playing some of the songs that we liked to hear while growing up.

But for me, I didn’t get my start until 1976. I started out as a B-girl. I used to travel all over the Bronx just to hear those breakbeats and wait for the DJ, along with other B-girls and B-boys, that would play those breakbeats that would just have us just rocking and jumping all up and down and hitting the floors.

How did you start rapping?

In 1977, when everything was going on in the summer, I wasn’t interested in doing anything else but being a B-girl. But at the end of 1977, after we had the blackout in New York City, late November or early December, I had become the first female MC of hip hop culture. Now let me remind you that there was no other female that was rocking the mic the way Sha-Rock was.

At the end of 1977, going into 78, I became the first female MC of hip hop culture. When I joined a group called The Brothers Disco, they were passing out flyers for auditions for MCs. They already had one male MC, who was KK Rockwell. And they also had Keith Keith who came on maybe a month or two before I did, or he could have come at the same time. I joined a group that was called The Brothers Disco, but not yet The Funky 4. So it was two guys and myself that were a part of this group.

How did you join the legendary group The Funky 4 +1?

In the beginning of 1978, another male joined the group after we had a battle with some other guys that were performing or MCing. So in 1978, I became a part of the first all-male group, which was the original Funky 4. Once again, when I started, there were no females that were kicking not just 8 bars or 16 bars. I was the only female out there at the time that was doing more than 32 bars, just rhyming and rhyming.

“The Funky 4 was very instrumental in being able to create what made hip hop culture today.”

I also was the first female MC with an all-female security and the first all-female hype crew. What they would do is that if I would say a rhyme and my all female-security would go out in the crowd and get people to sing along with me and repeat what I say.

I was the first female MC to be on national television, which was Saturday Night Live hosted by the legendary Debbie Harry, formerly of the rock group Blondie.

“We, as women, have been on the frontline from day one.”

We were on tour with the Sugar Hill Records Tour in 1980 or 1981. So we had gotten a call from Debbie Harry because she was hosting Saturday Night Live. And what we were told is that she wanted to find out who was the hottest rap group or hip hop group at the time. She could have chosen Grandmaster Flash and The Furious Five, which were just as hot as we were. But I think she chose us to go and appear on Saturday Night Live simply because we had a female and we were young faces. Even though we had records, and even though we were doing what we had to do back in New York City, I think she wanted to expose what was going on in the Bronx to the world.

What role did women play in the building and the evolution of hip hop culture?

So to be a part of a multi-billion-dollar business that has touched every aspect, every genre and every culture of the world, I am proud to say that I’m here to see it. A lot of people say “OK, let me give you roses.” You know, forget the roses. I’m still here to see how hip hop culture has transformed.

“If you’re celebrating all aspects of hip hop culture, then it’s moving.” 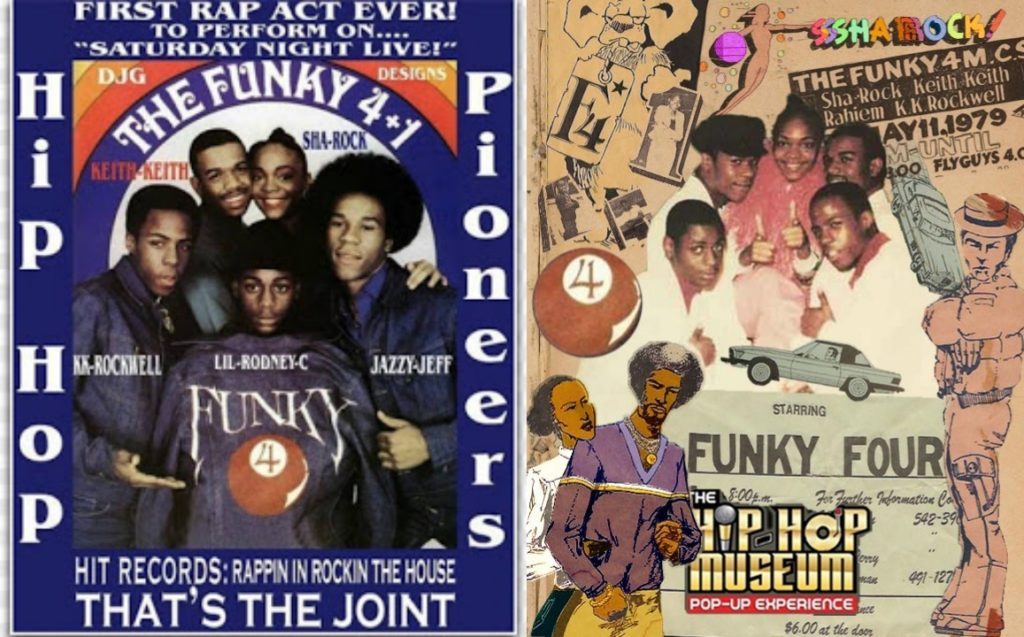 I think that we, as women, can be feminists in a whole lot of different ways. But I think that we should always stand up. When a person is doing wrong, we need to let them know, but in a respectable manner. The only way to become and stay powerful is that, we come from all different types of backgrounds, but at the same time we need to respect each other’s place, each other’s feelings and each other’s endeavors and whatever we choose or how we choose to live our lives.

“Hip hop is able to build and educate by telling your story.”

I’ve always been a person that was rocking with women from day one. People expect me to to say “well, I only listen to a certain kind of rap. I only listen to the original form of hip hop.” But I don’t. I listen to everything. I listen to a lot of things because I think that as women, we like to express ourselves in different types of forms. And I think that the way that hip hop is able to build and educate is by telling your story. Because we all come from all different cultures but we’re all there for the same common thing, and that’s “Peace, Unity, Fun” and by the same token respecting each other.

I think the powerful way that hip hop, and rap music within hip hop, can educate is by telling people stories, and by not degrading or not having each other’s back. We, as women, should always have each other’s back no matter what.

I just got signed onto LL Cool J’s Rock The Bells Radio. So now I’ll be on the radio besides trying to get my movie out. I have my script ready, that’s called Luminary Icon, so hopefully I’m just tweaking a little bit off the script.

“I was the first female MC to play for punk rockers in New York City in the 80s.”

So with that said, Madame Rap, you let everybody else know. I say this humbly because Sha-Rock is on 500 different flyers that show and prove who I am. I also have cassette tapes and video footage to show the early years of Sha-Rock on stage. I was the first female MC to play for punk rockers in New York City in the 80s.

What do you think about Madame Rap? What should be changed or improved?

With Madame Rap, I think what you’re doing is something awesome because what you’re doing is basically celebrating every aspect of women. It doesn’t matter what background they come from or who they are, but if they’re celebrating all aspects of the hip hop culture, then I’m rocking with you. You know why? Because it doesn’t matter where you come from or what your preference is. We’re all in this together and if you’re rocking for a good cause, then I say keep it up. I say respect all women.

“We, as women, are the most powerful species in the world.”

So I say respect to you Madame Rap. There’s nothing that you need to do different, but to keep moving forward and make sure that you let every MC, graffiti artist, breakdancer, B-Girl, B-Boy, and even people in the political field, know that Madame Rap has your back. But at the same time, you’re riding with them because you respect everything that they’re doing and putting forward to the culture.