Raja Meziane is an Algerian songwriter, singer, rapper and lawyer. As she has been listed as one of the BBC’s 100 most influential women of the year, the Prague-based-artist told us about her activism and the reasons of her exile.

How did you discover hip hop and how did you start to rap?

I didn’t really discover rap, I have always been a fan since my earliest childhood. It is a music I have always been attracted to. Making rap wasn’t a decision or a choice but every time I needed to express my anger, I found myself writing texts that could only be turned into rap verses.

How do you write? Do you have any rituals?

To write, I just need to completely keep myself to myself and listen to myself.

Would you say rap is a political tool?

I don’t see rap as a political tool, but more as a simple and powerful means to directly address the collective consciousness, which, in my opinion, makes its strength.

You left Algeria for Czechia in 2015. Why is that?

I unfortunately didn’t have other choice but to leave my country. I received direct and indirect pressures after I released the track Révolution in 2013 and in 2014, after I refused to contribute to a song to support the fourth term of the president in-place. These pressures ended up stifling me.

Are you in contact with other female rappers in Algeria or in Czechia?

Honestly, I don’t know any but the hip hop scene in both countries is very real. 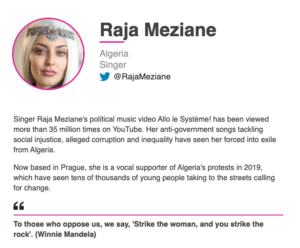 You are listed as one of the BBC’s 100 most influential women of the year. What does it mean to you?

Being part of BBC’s list is definitely a precious acknowledgement, which helped raise my voice further and allowed me to discover 99 other struggles, achievements and dreams.

Who are your female role models?

‘Dihya” aka ”El Kahina” (a Berber queen), Miriam Makeba and my mom.

I don’t consider myself a feminist but I am a woman who defends women’s rights and injustice no matter what, otherwise I don’t like to put a label on my commitments.

Many ongoing and upcoming singles, collaborations and concerts, some of which will be in France.

What do you think of Madame Rap?

Madame Rap made me discover quite a lot about the female rap scene in France and elsewhere thanks to helpful articles. I think it is a very good platform for well-known or unknown female rappers. As far as I’m concerned, it is a go-to, don’t change a thing!