Born in Dakar and based in Montreal, Sarahmée has been active for over ten years on the Quebec hip hop scene. The rapper told us about her second album Irréversible, her writing process, women in rap and feminism.

How and when did you discover hip hop?

I discovered hip hop through my cousin, when I was 9 or 10. He gave me tapes of New York rappers where there was one song on each side. He introduced me to the Fugees, Lucy Pearl, Nas and all the East Coast rap. That’s how I fell into hip hop.

Which rappers did you listen to while growing up? 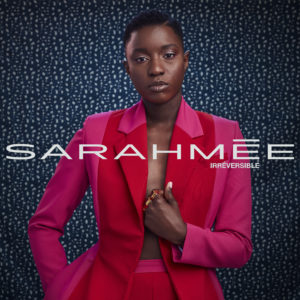 Last April, you released the album Irréversible which is very positive and empowering. Would you say it is a feminist album?

I think Irréversible has a feminist side because when you are woman, whether you like it or not, you have this feminist thing in you. I had things to say that burned inside of me, and I said them, it just happened like that. I didn’t expect people to consider it that feminist, but yes, it gives women strength and writing it made me feel good. I needed that strength. I have a 10-year career and did many things before people started to discover my music.

I believe we live in a time when it is important that women show themselves to their best advantage, push themselves forward and support each other. We need to realize we can do anything because everything is possible. It’s just that we lack female role models sometimes.

How do you work on your tracks?

For my first album, I received beats from producers. I wrote at home and went out to record but wasn’t a big fan of the studio.

For Irréversible, from 2017, I started to work on my own, without my sound engineer. I’ve been using the software Cubase autonomously for a dozen years. The idea was to be alone to work on the flows and the writing. I had the demos of the duo TenAm, who produced the whole album. I listened to the instrumental tracks and had the mic by the computer. I didn’t write on paper. I wrote top lines and melodies and worked on the lyrics. I recorded on my own, alone with my computer, sentence by sentence.

It is a new way of working, which allows me to develop the flow and technique, I love it.

Do you have any writing rituals?

I always begin with the melody. If the chorus catches me first, I write top lines and melodies, then mumble a tune. Same for the verses. I do a lot of “play” and “stop” and listen to the instrumental. When the song is done, I put the finishing touches to the text and work on metaphors, figures of speech and punchlines.

How is the female rap scene like in Montreal?

More and more female rappers take over the Quebec scene, which feels good. For the past years, there has been a lot of newcomers, including me. People begin to understand that, girl or boy, it doesn’t change the talent, the performance and the punchlines. Talent should be central, not gender.

But there is still a lot to be done because there is a long way to go, like everywhere. In any case, I’m glad to be part of this wave and to change mentalities because we need diversity.

Right now, Quebec rap is more and more diversified in gender and styles, and it’s important. It’s not because we are girls who rap that we all do the same kind of rap.

Who are the women who inspire you?

Diam’s had this ardor and energy that I always admired, a huge talent and persistence that allowed her to dominate the rap industry in France. Despite all she’s been told through her whole career, she remained herself. In the same vein, there are Lauryn Hill, Alicia Keys and Pink, girls I’ve been listening to since I was a teenager and still follow today because there are role models. They didn’t yield to this business and pop culture that tends to hypersexualize women and Black women too. They have always inspired me and I’ve always related to them.

Yes, I can say that. It is something I discovered with experience and time. I really try to challenge all the stereotypes that I live as a Black woman in rap and knock them over through my work, performance, intelligence and the messages in my songs. It is a part of my mission, if I have one on this Earth. I know I represent different things for different people in the world. If my music works and allows me to travel and do good around me, it’s the goal. And if it can inspire other young women, my mission will be accomplished.

There are still a lot of stereotypes, and not only in music, but also in cinema and big companies. I think we should not neglect women’s intelligence, but unfortunately, people tend to limit ourselves to certain roles. And I don’t fit in these roles, so I’m not going to embrace them either.

What are your upcoming projects? A European or French tour coming soon?

I’m finishing a summer tour of Quebec festivals. I will be releasing a video in the next few days and other videos this fall. I will be in Brussels on October 10, opening for Lord Gasmique at the Festival Francofaune, and I will spend a few days in Paris as well. The idea is to go to French speaking countries. I was in Paris in April with Chilla for the radio show Planète Rap and I hope to come back to France, but also to Africa. So very soon yes, if it all goes right!

I knew Madame Rap but really checked out the website yesterday. I encourage you to go on. We need an important media that highlights female rappers and artists. It is also a great thing that it is international. I believe that all female rappers, no matter where they are in the world, live the same challenges.